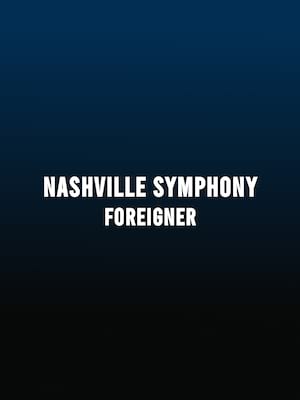 a magical night with an amazing band and something you really can't afford to miss.

Legendary rock band Foreigner will make their American orchestral debut in Nashville, performing alongside the Nashville Symphony Orchestra performing a slew of their greatest hits, including 'Cold As Ice', 'Feels Like The First Time' and 'Waiting For A Girl Like You'. Led by founding member Mick Jones, hear the group's classics in a brand new light at the Schermerhorn Symphony Center.

Founded in 1976, Foreigner's career has seen global success with five top-10 albums and platinum certifications around the world. Conductor for this concert is Ernst Van Tiel, whose previous credits include the Brussels Philharmonic and the London Symphony Orchestra.

Sound good to you? Share this page on social media and let your friends know about Nashville Symphony - Foreigner at Schermerhorn Symphony Center.