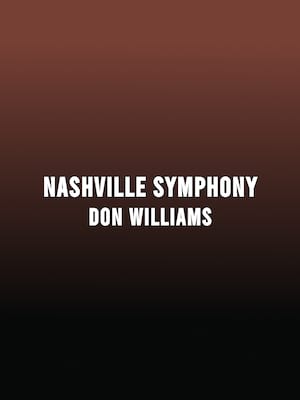 Revered as one of the finest singers of the genre, the "Gentle Giant" was known for his smooth, mellifluous vocals.

Memories and Music of Don Williams

Nashville Symphony and Don Williams' own touring band join together for a tribute concert to the Country Music Hall of Famer, embarking on a journey through the career and works of the 'gentle giant'. Never-before-seen concert footage plays on the big screen while the band and orchestra accompany Don's unforgettable voice.

The orchestra is conducted by Enrico Lopez-Yanez, Nashville Symphony's Principal Pops conductor, and attendees will also be able to view a host of special memorabilia on display including Don's own tour bus and his signature hat and guitar.

Sound good to you? Share this page on social media and let your friends know about Nashville Symphony - Don Williams at Schermerhorn Symphony Center.