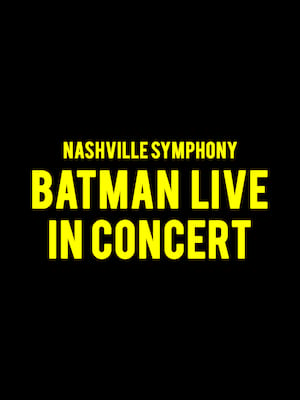 The movie that gave birth to the summer blockbuster remains impressive

Though there is a veritable deluge of superhero films and remakes, some editions of classic caped crusaders stand the test of time. One such example is Tim Burton and Warner Brothers' iconic take on the tormented defender of Gotham City Batman - released in 1979, it redefined the superhero genre and moved Batman's story back towards his darker, grittier roots. Experience the rollicking feature film adventure during a special live HD screening with added orchestral accompaniment by the Nashville Symphony.

Danny Elfman's epic score punctuates the origin story of Bruce Wayne AKA Batman, as portrayed by a chisel-jawed Michael Keaton. After witnessing his parents murder as a young boy, Wayne is driven to fight the crime that cost them their lives, donning a disguise as the Batman. Enter his toughest foe yet, Jack Nicholson's The Joker, who rises to the top of Gotham's criminal underworld and begins a rain of terror that Batman must end whilst keeping his identity, the citizens of the city and his love interest - reporter Vicki Vale (Kim Bassinger) - safe.

Sound good to you? Share this page on social media and let your friends know about Nashville Symphony - Batman Live in Concert at Schermerhorn Symphony Center.