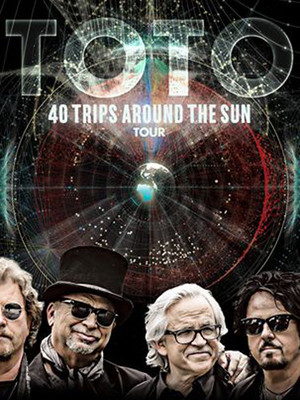 40 Trips Around The Sun Tour!

Homegrown veteran rockers Toto are once again hitting the road on their 40th anniversary for their 40 Trips Around The Sun tour, a retrospective concert of some of the bands greatest hits along with deeper cuts! Combining a myriad of musical styles since forming in 1977, the band are known for their enthusiastic forays into pop, rock, soul, funk, progressive rock and hard rock.

Coming to instant prominence with their debut self-named album in 1978, the EP spawned three successful singles that reached the top 50 on the Billboard chart, namely Hold the Line", I'll Supply the Love and Georgy Porgy. Now 16 albums and 40 million album sales later, the band have been honored with six Grammy Awards and an induction into the Musicians Hall Of Fame in 2009.

Recently releasing their 40 Trips Around The Sun, which is an expansive Best Of collection, TOTO spent most of last year re-mastering old tracks and working on new music. Don't miss them when they come to a city near you!

This was a bucket list concert for me and TOTO did not disappoint . The... more

I have read in previous reviews from other concert halls that the reviewers(fans/concert... more

Sound good to you? Share this page on social media and let your friends know about Toto at Ryman Auditorium.