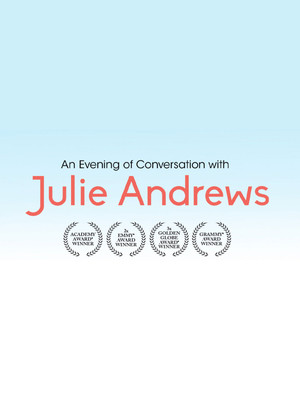 Julie Andrews originated some of the most memorable film characters of our childhoods, and she has continued to evolve over the years, remaining just as relevant and cherished as when she first graced the silver screen.

An Evening Of Conversation With Icon Julie Andrews

From whirling-dervish-darling of the Austrian mountains to umbrella toting magical nanny, Dame Julie Andrews has portrayed some of the most iconic characters on the silver screen, imbuing each with her natural charm, endless grace and enviable poise. Don't miss the chance to hear about the icon's extraordinary career in her own words when she takes to the stage during 'An Evening of Conversation With Julie Andrews', a series of unforgettable discussions and Q&A sessions facilitated by her very own daughter

Performing on the British vaudeville circuit with her parents from a young age, Andrews' prodigious creative talents flourished and it wasn't long before she graduated to the West End and Broadway, making her debut on the Great White Way at the tender age of 19 portraying Polly Browne in the 1954 production of The Boy Friend. At the height of her career during the following decade she was simultaneously associated with the highest-grossing Hollywood blockbuster, best-selling album and most successful Broadway musical of the era.

Sound good to you? Share this page on social media and let your friends know about Julie Andrews at Ryman Auditorium.