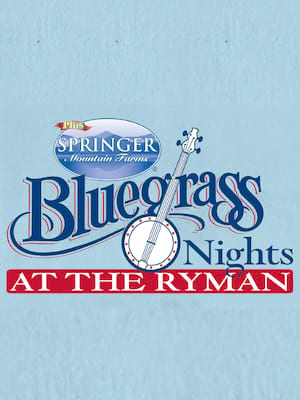 Bluegrass Nights at the Ryman

Although Nashville's Ryman Auditorium has hosted concerts and events from virtually every musical genre in its 128-year history, its integral role in the birth of bluegrass is one of the hallowed venue's most important claims to fame.

Why See Bluegrass Nights at the Ryman?

For twenty years, the Bluegrass Nights at the Ryman concert series has showcased the brightest lights in bluegrass music. Inviting up and comers, and celebrated performers alike to the Grand Ole Opry stage for six glorious nights this summer, the venerated tradition returns with the talents of The Del McCoury Band, Dan Tyminski, Molly Tuttle, The SteelDrivers, Ricky Skaggs & Kentucky Thunder, Dailey & Vincent, and Vince Gill.

Bluegrass Nights is a Nashville tradition with a legacy as strong as the Ryman Auditorium itself. In 1945, a then-unknown banjo-player named Earl Scruggs performed with Bill Monroe's Blue Grass Boys for the first time, also debuting a whole new genre based on combined harmonies and upbeat tempos. Thus the genre was born, and the Ryman is now forever known as the Birthplace of Bluegrass.

Seen Bluegrass Nights at the Ryman? Loved it? Hated it?

Sound good to you? Share this page on social media and let your friends know about Bluegrass Nights at the Ryman at Ryman Auditorium.