Sorry! You missed Mott The Hoople at War Memorial Auditorium 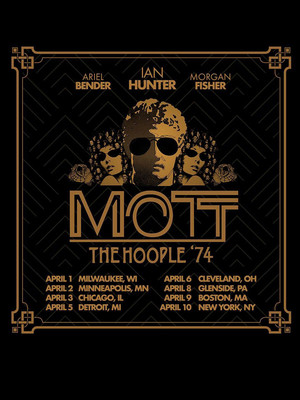 The magnificent The Golden Age of Rock'n'roll and All the Way from Memphis remain rollicking, rambunctious glam-rock anthems, alive to their own glory and absurdity, while All the Young Dudes and Roll Away the Stone are roustabout encore gems.

Why See Mott The Hoople?

They may not be the 'young dudes' they used to be, but Mott The Hoople are very much alive and still rocking! In the Spring of 2019, the celebrated British classic rock icons embarked on their first North American tour for the first time in 45 years, commemorating the 45th anniversary of the legendary 1974 US tour, which featured Queen as an opening act, as well as the release of their last two albums 'Mott' and 'The Hoople'. Now, this fall you have another chance to catch core members Ian Hunter, Ariel Bender and Morgan Fisher resurrecting MTH's glorious past with live renditions of seminal hits like 'All The Young Dudes', 'The Golden Age of Rock and Roll' and 'All The Way From Memphis'.

Arguably one of the most beloved glam rock outfits of the 70s, Mott The Hoople has reformed on rare occasions but only ever played in their native UK. Formed in 1969 and named after the eccentric Willard Manus novel, the group remained underground heroes, never fully breaking into the mainstream but retaining a dedicated and fanatic fan base and remaining a major influence on other bands including Def Leppard, Oasis, REM, Motley Crue and The Clash. Blurring the lines between genders, the make-up toting Mott The Hoople reprobates conjured raucous rock magic with flaming guitar riffs, bluesy grit and subversive lyrics.

Their "Live" album was released in '74 after they broke up, so the tour... more

Sound good to you? Share this page on social media and let your friends know about Mott The Hoople at War Memorial Auditorium.