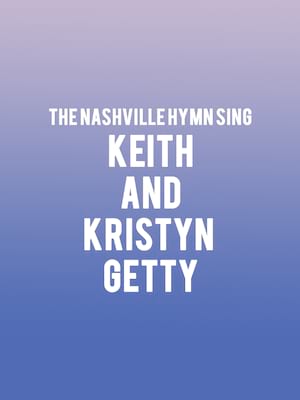 What I love about the Gettys are their lyrics, truth-filled modern hymns that never fail to move you.

Why See The Nashville Hymn Sing - Keith and Kristyn Getty?

An Evening of Inspiring Hymns & Stories

Originally hailing from Northern Island, Keith and Krystyn Getty have emerged as the most popular modern hymn songwriters in the world. They are perhaps best known for 'In Christ Alone', which can regularly be heard in churches across the globe, and have nine studio albums to their name. Join the husband and wife duo, as well as evangelical Christian author Joni Eareckson Tada and a few friends, at their Nashville Hymn Sing at the Grand Ole Opry this summer.

A marvel of resilience and hope, Eareckson Tada became a quadriplegic after a diving accident of the age of 17. Emerging from the ordeal with a determination to help others in similar situations, she became a widely respected painter and author, as well as a leader of Christian ministry in the disability community.

Sound good to you? Share this page on social media and let your friends know about The Nashville Hymn Sing - Keith and Kristyn Getty at Grand Ole Opry House.