You can catch Carbon Leaf at The Kent Stage in Kent, showing Mar 8, 2020

Carbon Leaf is also touring to: 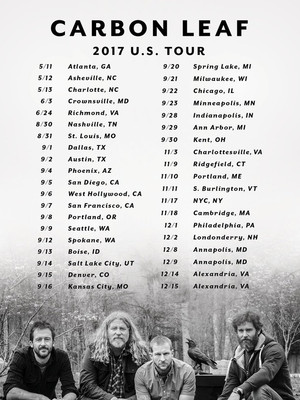 Known for their close contact with fans, their concerts feel like more of a family get-together rather than a label-sponsored tour. And that's what keeps them coming back for more.

When a band sets out to re-record the albums that have defined them, you know they've reached a milestone. Ever popular folk rock quintet Carbon Leaf first turned heads and ears with their heady mix of alternative country and celtic-infused indie rock in the early 90s, and have continued to redefine genres with each subsequent release over the years. Catch them live as they bring new life to a catalogue of surefire fan favorites.

In the determined spirit of DIY Indie music, the band embarked on an ambitious project to re-record the albums they released with Vanguard Records in order to gain the rights to their songs, releasing them themselves. Thus, every album and ticket sold contributes directly to their legacy. Don't miss the pioneering purveyors of (in the band's own words) ether-electrified porch music doing what they do best.

Sound good to you? Share this page on social media and let your friends know about Carbon Leaf at City Winery Nashville.