Sorry! You missed All For The Hall at Bridgestone Arena 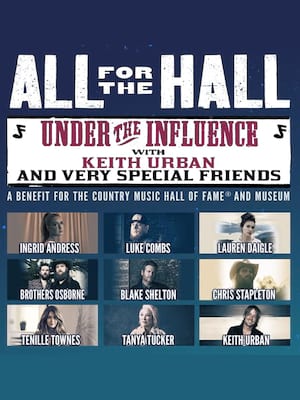 All For The Hall

This year's All for the Hall benefit is our chance to acknowledge those that have been an influence on us and helped shape the artists that we are today. Somehow these shows always seem to take on a life of their own. They're incredibly fun to do, and yo

Why See All For The Hall?

Country With A Cause

Join a star-studded roster of Country music's biggest artists for the return of the 7th annual All for the Hall benefit concert this winter! Sure to blast away those seasonal blues and set Nashville's Bridgestone Arena alight, the likes of Keith Urban, Blake Shelton, Luke Combs, Ingrid Andress, Lauren Daigle, Brothers Osborne, Tenille Townes, Tanya Tucker, Blake Shelton and Chris Stapleton all come together to raise noble funds for the Country Music Hall of Fame and Museum's education programs.

Devised and lead by four-time Grammy-winning crooner Kieth Urban, past All for the Hall concerts have raised a staggering $3.4 million and this year its set to pull in its greatest charitable yield yet. The theme for the 2020 spectacular is Under The Influence - each performing artist is set to cover a song by an artist that has inspired their own work, as well as one of their own original tunes.

Sound good to you? Share this page on social media and let your friends know about All For The Hall at Bridgestone Arena.