Sorry! You missed Why Don't We at Ascend Amphitheater 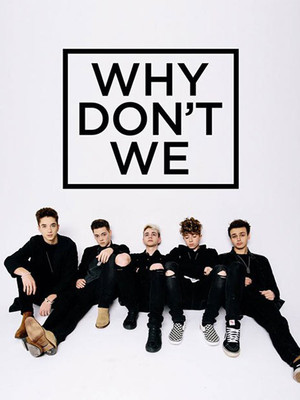 One Direction may about to be overshadowed by this newest band.....

Why See Why Don't We?

Why Don't We are hitting the road in support of their debut album, 8 Letters! Released at the end of August, 2018, 8 Letters includes the hit song 'Trust Fund Baby'. Don't miss out when they hit your town!

Posited as the likely successors to One Direction, WDW comprises former solo pop stars Corbyn Besson, Daniel Seavey, Jack Avery, Jonah Marais, and Zach Herron, forming in September of last year. Combining their good looks, talent and charming personas under one banner, their sound is inspired by the likes of Justin Bieber, The Chainsmokers and Shawn Mendes, to name just three influences. Their debut EP, aptly named 'Only The Beginning' dropped in October, with three singles spawned from the release, including "Taking You".

The band has currently been working with YouTube vlogger Logan Paul, who has directed three of their videos and was involved in collaboration on their track "Help Me Help You".

why don't we is amazing and i love them, they treat every show as its own... more

Sound good to you? Share this page on social media and let your friends know about Why Don't We at Ascend Amphitheater.