Sorry! You missed Foreigner with Kansas at Ascend Amphitheater 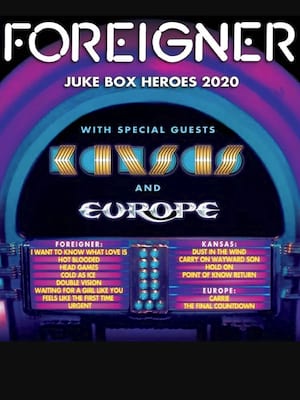 Why See Foreigner with Kansas?

Half English, half American quartet Foreigner formed in 1976 and enjoyed immediate breakthrough success upon the release of their debut eponymous album just a year later. Turning the rock and roll power ballad into an art form, they became one the best selling bands of all time thanks to certified platinum smash hits like Cold As Ice, Waiting For A Girl Like You and I Want To Know What Love I. The band is still trucking over four decades since their first record - don't miss them on the Juke Box Heroes tour with fellow stadium rock outfits Kansas and Europe.

The tour comes off the back of Foreigner's latest release Double Vision, Then & Now, a 40th-anniversary recorded concert celebration of their equally stellar sophomore album. It's not the first time the group has shared the stage with Kansas, who'll be dusting off their own genre-defining hits. Keep an ear out for Carry On Wayward Son and Dust In The Wind.

Seen Foreigner with Kansas? Loved it? Hated it?

Sound good to you? Share this page on social media and let your friends know about Foreigner with Kansas at Ascend Amphitheater.