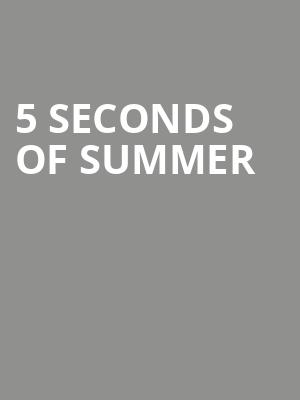 Why See 5 Seconds of Summer?

Take the polished performances and songwriting of bands like One Direction and combine it with the energy-filled guitar riffs of punk and you get a rocking group of four talented Aussie boys who're set to take on the charts! 5 Seconds of Summer (or 5SOS) is made up of Luke Hemmings, Michael Clifford, Calum Hood, and Ashton Irwin. The boys hail from Sydney, Australia, and are influenced by artists like Busted, Blink-182, All Time Low and Ed Sheeran.

The band started out posting video on YouTube of themselves performing covers of popular songs, which caught the ear (and eye!) of some execs over at Sony. Their talented was immediately noticed and they were quickly scooped up and offered a recording contract. Their 2020 tour comes in the wake of their mega-hit, Youngblood, which went Platinum in the USA, Canada, the UK and Australia! They're joined on tour by The Band Camino - dont miss out!

Seen 5 Seconds of Summer? Loved it? Hated it?

Sound good to you? Share this page on social media and let your friends know about 5 Seconds of Summer at Ascend Amphitheater.