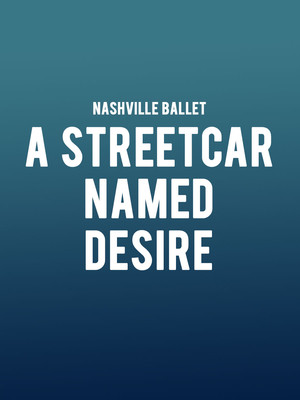 Sparks fly in Annabelle Lopez Ochoa's searing adaptation of Tennessee William's classic work, presented by the Nashville Ballet as part of their 2019/20 season. Following on from a highly praised debut with the Scottish Ballet in 2017, this stunning reimagining captures the heat and emotion of Williams' masterpiece, recast in a balletic setting. Mesmerizing and devastating, don't miss what is sure to be a much talked about production!

When faded Southern belle Blanche finds her decadent life crumbling around her, she falls on the mercy of her timid sister Stella for some relief. However, she didn't factor in Stella's domineering husband Stanley, who is determined to control his wife ahead of the birth of their first child. A strong sexual marriage is suggested between the two, as well as frequent arguments and threats to leave him. Throw the sexually flamboyant Blanche into the mix, and a devastating sequence of events follow...

Mature audiences - contains scenes of a sexual nature and abuse

Photo by Nathan Lindahl on Unsplash

Sound good to you? Share this page on social media and let your friends know about Nashville Ballet - A Streetcar Named Desire at Andrew Jackson Hall.