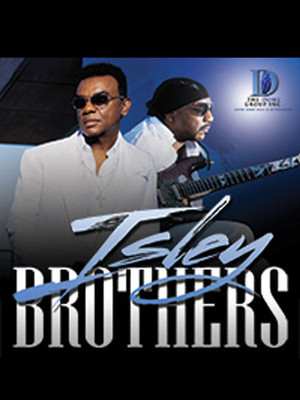 Over the course of multiple decades and multiple musical styles, the Brothers are an R&B institution.

There are few greater names in the world of soul than the Isley Brothers. Originally formed in the 1950s as a vocal trio, the group enjoyed moderate success through the preceding decade, but it was in the 1970s, with the addition of some new members, that they really hit their peak. Taking their funky tendencies to a whole new level, they produced stellar albums like The Heat is On and 3 + 3, which included their now iconic take on Seals and Crofts' Summer Breeze. They've been inducted into both the Rock 'N' Roll and Vocal Group Halls of Fame.

In subsequent years the Isley Brothers line-up fluctuated dramatically, and for this current tour, they're down to two members - Ronald and Ernie. But don't worry, they can still bring the funk like the best of them! Catch these musical greats when they play the in , , .

Sound good to you? Share this page on social media and let your friends know about Isley Brothers at Schermerhorn Symphony Center.