Sorry! You missed Aladdin and His Winter Wish at James K Polk Theater 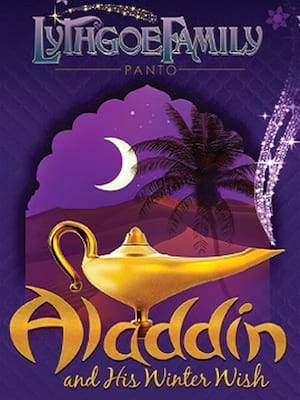 Aladdin and His Winter Wish

Magic, mayhem and jokes galore in this holiday pantomime

Why See Aladdin and His Winter Wish?

Aladdin gets the pantomime treatment in this holiday show from Lythgoe Family Panto. Taking after British tradition, these shows promise plenty of hijinks and mischief, razzle-dazzle, song and dance numbers and plenty of audience participation. This wonderful production is likely to be a Holiday treat for all the family, providing you and your nearest and dearest with memories that will last until at least New Years' Eve!

A-LAD-IN-CAVE - THE STORY OF ALADDIN

Promised treasure beyond his dreams, Aladdin sets off from the home he shares with his laundress mother Widow Twanky and prankster brother Wishee-Washee on a mission for local wizard Abanazar. To gain his prize he must enter the not at all creepy or ominous Cave of Wonders and steal a lamp for his morally ambitious benefactor. Once it has been recovered he realizes he's been tricked and is trapped in the crumbling cave facing his doom. But hope is not lost, when he accidentally rubs the lamp he frees its magical prisoner, a wish-granting Genie!

Join Aladdin on a daring adventure as he sets out to quash Abanazar, change his family's lives and get the girl!

Sound good to you? Share this page on social media and let your friends know about Aladdin and His Winter Wish at James K Polk Theater.